Marcelo Garcia on Judo Vs Wrestling

So you wanna train with Alliance Sao Paolo?

Exclusive Interview with the man who made BJJ HUGE in the UAE. 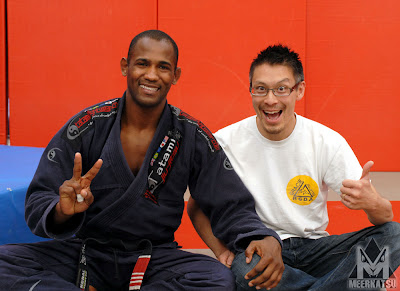 Busting my neck earlier in the week had an unlikely positive effect on me today. Despite not being able to take part in the Fernando Terere seminar today, held at BJJ School’s Battersea dojo, I was able to concentrate fully on taking snaps and absorbing the cool vibes. I was also able to grab a quick interview with the great man so all in all a fab day out of the office. Here are some more photos… Since I was fully absorbed being a snapper, I didn’t really keep track of what Terere was teaching so I can’t really write a full seminar review. But I can at least descibe moments and of course give a little picture of what he is like.

First of all, Terere clearly looks like a man who has demolished his demons. He looks great, smiles all the time, shows incredible patience and above all, was a very very diligent and technical teacher today. Well so he should be since one of the things he is known for is honing the talents of such luminaries as Cobrinha, Galvao, Moraes and Finfou (non BJJ readers take it from me, the aforementioned list of names are some of the greatest competitors walking the Earth right now).

I’m sure he knows enough English to get by, but all the instruction was spoken in Portuguese with Felipe Alves de Souza acting as both uke and translator. I didn’t know this but Felipe and Terere were old time tournament adversaries back in Brazil when they were growing up. They would keep a wary eye on each other every year – never quite meeting in competition – until they both became black belts (Felipe lost that time). However during the opening and closing speeches by Terere, it was clear to everyone just how much respect and admiration they had for each other. It was quite touching.

After teaching a series of techniques, some of which may have included spider guard passes (again, sorry but I wasn’t taking notes), half the seminar attendees left and the rest sparred. Terere called out whoever was nearest and the rolls came thick and fast. As an observer, I noted that Terere, whilst always dominant when rolling, always allowed his opponents to get a sweep here, or a pass there. He made them work but always found a way through and got the submission. Of course this was expected, he is a World Champion black belt after all. But he’s also not really been in action for the best part of six years so it’s pretty cool that he was happy to, well, just roll carefree.

The finale came when Felipe and Terere sparred. The whole room hushed in silence as both black belts locked horns, exchanged grips, sweeps, passes, side, mount, open, closed..it was a masterclass in serious elite level rolling – quite a privilege to observe and say, I was there. Neither submitted the other but both worked up quite a sweat. Amazing stuff!

My thanks to Ed Brown from Champ Camp for inviting me down. Thanks to Felipe and everyone at BJJ School for making me feel welcome. Thanks to Jackson for his translation during my interview and thanks to Sasha and of course Terere.